The Walkie Talkie Guide is supported by its audience. When you purchase through links on our site, we may earn an affiliate commission. Learn more.

The Baeofeng BF-888S is one of the walkie talkies you could probably describe as “industry standard”. If you’re already toying with the idea of buying one then this review should be perfect for you.

If you’re on a tighter budget – or even if you have some cash to spare – you should consider the BF-888S. You get far more than what you actually pay for with this device.

The transceiver is brilliant and can be used to pick up signals from the fascinating world of HAM radio – if you’re considering getting in to HAM radio but don’t want to part ways with a lot of cash on a fancy HAM radio kit, you can opt for this as a less expensive entry level option

It’s a bit of a no brainer for a budding HAM radio enthusiast – if you find your not as interested as you thought you would be then you haven’t wasted a considerable amount of money on a kit!

At first sight, you’ll likely note that this device employs a more rugged design. It’s 100% built to be sturdy. It’s charcoal black design looks great and will blend in well with black clothing to those of you who may be working security.

The rear end of the device has a large, strong belt clip for when the device is not in use. Just underneath this is the compartment for batteries + AC power in. This device also comes with a 1500mAh battery pack

It’s lacking a keypad – this may seem odd to you as it’s a 2way radio. The reason it’s missing a keypad is actually pretty simple – it doesn’t need one. The two orange keys to the left do all the work for you. Next to these two buttons is a PTT switch and a toggle for the built-in LED flashlight that comes with this radio set.

It has a fairly small and compact design that lets it fit snugly in your hand without the need to worry about dropping it.

Kenwood ports (2pin) + a programming cable port is present on the opposite side, these can also be used as a speaker/microphone port.

Configuring and enabling your device to begin with isn’t too tricky, you should be able to get it up and running in no time. Open the rear battery compartment and insert the provided battery – then – plug in your charging kit. It should only take about 4 hours to fully charge the device, meaning you don’t even need to leave it charging overnight!

Once fully charged, you’re ready to get rolling. Simple toggle the power on. The device comes with a built in voice prompting system which will explain to you how to correctly program the device for various channels. The lack of keypad/display might seem intuitive – but the voice guide more than makes up for this.

Once it’s programmed – everything else is a breeze. No additional settings to fiddle with or displays to confuse you mean it’s just a case of pressing/releasing the transmit button and not much else.

If you’re looking to program this device, you’ll need a programming cable that’s compatible with the device. Luckily, these are fairly cheap and easy to source – you can even buy one direct from the website of the manufacturer. (Hobbyist shops are also a popular place to source programming cables)

Baofeng provide software for programming these devices on their website, you can also use CHIRP as this device is CHIRP compatible.

If you’re unfamiliar with CHIRP, it is a free & open source radio programming software that’s very popular amongst hobbyists as it has a very easy to use interface.

On-screen instructions are present in both programs when you’re programming a radio. Follow them to a T and you shouldn’t encounter any difficulties.

It’s as simple as selecting a COMM port, switching the radio on and navigating to “read from radio” in your software in order to get all available channels.

The programming software will also allow you to enable/disable certain features such as VOX, which is when the device automatically transmits when it detects sound above a certain level of decibels. (This allows for hands-free communication without wasting time continuously transmitting)

Let’s have a look at the functionality of the device – how well it transmits, battery life, range etc are all major factors in selecting a handheld radio device, especially budget-esque ones which can vary extensively in terms of quality.

The receiver has excellent sensitivity. This is absolutely ideal for areas with a low number of RF signals, however the poor selectivity of the device means that areas with higher RF activity can begin to cause issues.

Transmission range under ideal conditions is about 2 miles at maximum power. Under non ideal conditions you can still clock a range of about a mile, meaning this device is perfectly suited for small scale operations such as concert or venue security. If you’re looking to get city-wide transmissions then you’ll have to look at another device.

The battery life is great, it only takes about 4 hours to charge and you can get a solid 9-10 hours of power during periods of regular use. We recommend you don’t allow the battery to drain completely, as this will cause it to take slightly longer than 4 hours (having a headstart with the charge can make a bit of a difference with charging times with this style of battery)

The battery also has an alarm that will warn you when it’s starting to get low. It’s unlikely you’ll find yourself needing to recharge, though, given the 10 hour window of battery life you get. (and how brief the period of time that’s actually required to charge the thing).

This device is a perfect entry-level product. If you’re just looking for a decent walkie talkie on a reasonable budget that gets the job done – this is a great pick. It’s ideal for smaller areas which puts it in a good position to be used for jobs such as concert security, shopping centre security etc

If you’re exploring the great outdoors with friends and don’t plan on venturing too far from camp, this device is ideal too. Take it camping/fishing as an emergency point of contact in case you get split off from the group and don’t have any cell service!

Camping is actually ideal because there is likely to be less RF interference out in the countryside – meaning that the sound quality will be much higher when using this radio there than it would be using it in a busy city.

You may, at first, be put off by the lack of display or control features – this may make the device feel less accessible. But in many ways, it makes the device more accessible, once it’s programmed you effectively have a plug-&-play scenario where not much worry has to be put in to device configuration.

The built in flashlight and battery prompts make this great as a sort of entry-level survivalist radio. It even has an emergency alarm available on channel 11.

The only major prohibiting factor is the fact that it’s PC programmed. If you don’t have a desktop or laptop you’ll have to find another way to get this device programmed – presumably at a friends house, an internet cafe or a library. 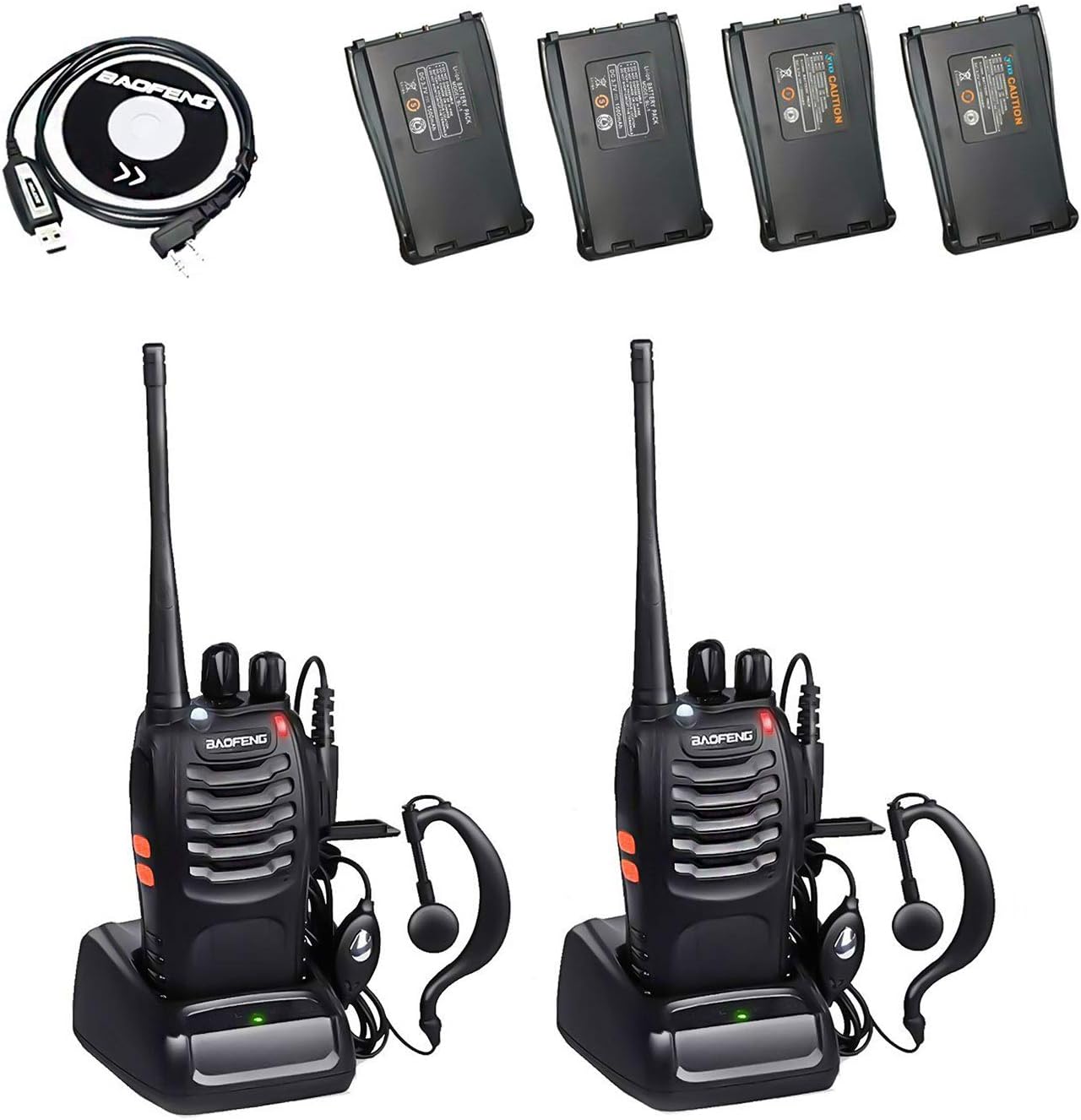 0
Whether for outdoor work, leisure or as a hobbyist, walkie talkie radios provide a great way to communicate up to around 5...
Read more

5 Best Shortwave Radios Under $500 (& What Makes Them Great)

0
Head back to the 90's and shortwave radio was the king of communications. Thanks to its unbelievably long-range and ease of transmission,...
Read more

0
Walkie Talkies are a great way to keep in touch when out and about, either as part of your work operations or...
Read more

0
Baofeng is still one of the most popular walkie talkie brands on the market with their broad range of FRS & GMRS...
Read more

0
Even in the age of smartphones, DMR Radios are an excellent option for fast and reliable communication! They won't be affected by adverse weather...
Read more

0
Baofeng is still one of the most popular walkie talkie brands on the market with their broad range of FRS & GMRS...
Read more
Baofeng

0
Featured below is an in-depth break-down and a comprehensive Baofeng UV-82HP review. Important info from the manufacturers specifications, programming instructions and a feature list...
Read more
Baofeng

0
So you're looking for the best Baofeng radio, right? The importance of communication cannot be overemphasized, especially during emergencies. Technology has made it mandatory that...
Read more

Stay on op - Ge the daily news in your inbox

TheWalkieTalkieGuide.com is a participant in the Amazon Services LLC Associates Program, an affiliate advertising program designed to provide a means for sites to earn advertising fees by advertising and linking to Amazon.com, Amazon.co.uk, Amazon.ca.

In compliance with the FTC guidelines and complete transparency for our readers, please assume the following about links and posts on this site – Learn more.